How God called me into communications 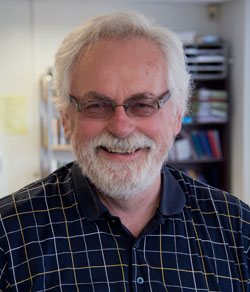 On a wall in John Martin’s office is a large year planner. It is like a road map, charting the purpose of John and his team, who comprise the communications department at Christian Medical Fellowship (CMF).

Each year, John, CMF’s Head of Communications, and his team work with other departments on flagship programmes and projects linking health and the Bible.

‘Our job is to help shape the key messages of CMF,’ says John.

He sees the task of the CMF Communications team as encouraging Christian doctors, students and health care professionals to be confident in sharing their faith.

‘We are essentially a service unit. We don’t do a huge amount of creative writing ourselves. We are keen to get other people into print and into action one way or another,’ he says.

The Communications department’s duties range from social media feeds, press releases and videos to producing CMF flagship publications such as ‘Triple Helix’, a magazine for doctors and ‘Nucleus’, a publication for students.  It also helps produce the CMF files and news.

‘Our biggest project has been ‘The Human Journey’, an eight part course, a kind of A to Z of the interface of Health and the Bible,’ explains John, who grew up in Bogan Gate, a small community in Western New South Wales, Australia.

He remembers vividly how much God featured in his early life.
‘I owe that principally to my father who modelled something very special and took seriously advice from Deuteronomy about teaching God’s ways,’ John recalls. ‘He was very patient but very interested in drumming the Christian faith into us. From a very tiny boy, I remember him helping us to pray every night.’

Years later, John had a fresh encounter with God on a visit home from university. It shaped his life and career.  While driving a tractor during the night shift on his father’s busy farm, John looked up into a carpet of stars dotting the Milky Way and ‘was overcome with a sense of God’s wonder’.
John recalls, ‘I stopped the tractor. I knelt in the newly ploughed furrow beside it and I said to God, (whose) presence was almost shouting from the sky, that I will do whatever you ask of me. I have always sensed that whatever I have done since is to follow that promise.’

From Bogan Gate, God brought John on mission visits to 40 different countries. He and his wife Deirdre also met some of God’s well known servants including the anti-apartheid campaigner and retired Anglican archbishop Desmond Tutu.

‘…It all began by really just simply saying (to God) ‘I’ll follow,’ says John, a licensed Reader who preaches in his local Anglican Church.

God shaped a career that saw John move from being a print journalist to his involvement in Christian communications. He was a staff worker with the Australian Fellowship of Evangelical Students and was a communications officer at the Anglican Diocese of Sydney in Australia.

From there, he came to London as the first communications director at the International office of the Anglican Communion. For nearly a decade, he was also the editor of the ‘Church of England Newspaper’.

John first connected with the CMF as a freelancer in 1996, working with Dr Andrew Fergusson, CMF’s former head, to co- develop ‘Triple Helix’. He later came on staff at CMF as a senior editor in October 2012.

In 2016, they hope to complete two book projects including a modern language version of the writings of the physician and gospel writer Luke. It will combine the Gospel of Luke and the Acts of the Apostles and will also have an introduction setting the context.
‘It’s the sort of thing we hope that our members will use as a tool to share their faith,’ John says.  ‘It is a tough time to be a believer. Christian doctors and nurses and other health care professionals live very close (to) where some of those hostilities kick in. Helping Christian doctors to be articulate, informing them about key issues is really important and we need to bring on successive generations of Christian doctors and healthcare professionals who are confident in their faith and know how to share their faith without unnecessarily be putting people off.’

John adds, ‘My great desire is to see a generation of Christian doctors who can speak and write about their faith, can be salt and light in their profession and I‘d like to think that I, in a very humble sort of way, can be a help meet to that process.’