How do we respond to Aleppo? 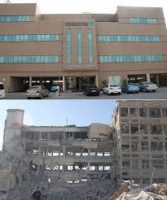 The news coming out of the Syrian city of Aleppo in the last few months has been horrific and heart-breaking. Not least because the whole world seems impotent to stop the killing and destruction. But this is not a new siege, just the closing stages of a long, bitter battle by the Syrian regime to reclaim the once fabled jewel of Syria, held by rebel forces since 2012.  The city has been divided for some time between a rebel held East and a Government held West.

The most recent news is even more shocking, as reports have come in of rebel fighters and civilians (allegedly including women and children) being summarily executed in the street by pro-government forces, and emerging reports of the execution of civilians fleeing the battle by rebel forces.  The battle for the Eastern part of the city is coming to a bloody end, and while the UN has sought to broker ceasefires to get resources in and civilians out, it has until recently been largely ineffective.

Hospitals in both sides of the city have been bombed, civilians, rescue and health workers targeted or indiscriminately bombed by both sides. Medical supplies in the East of the city have pretty much gone, and as things currently stand, there appears to be no working medical facility left in that part of the city. Those civilians left and not being evacuated face an uncertain future under the restored rule of the Syrian government.

The biblical accounts of sieges in Israel’s ancient history show how the horrors of modern day warfare differ little from ancient times. But they also show us that those who chose such a bloody path mark their own downfall. Whatever the wider, complex, geopolitical forces that have led to this brutal conflict, we cannot ignore that both sides have committed atrocities, and both will live or die with the consequences.

But also, we in the West have to admit our own complicity – choosing not to intervene we have created a power vacuum that others have filled. It seems there is ‘no peace along the way of safety’ as Bonhoeffer put it.  The consequences of choosing not to intervene have been as bad a as our past interventions in the region – a real Catch 22 situation. But the Old Testament prophets were just as scathing of the comfortable who sit by and ignore suffering and injustice.

Yet in the midst of all of this, there are some glimmers of hope. In Western Aleppo, we hear from our contacts in the city of churches continuing to flourish. Christians are active in the medical services that survive there, many staying to serve and minister to their hurting city when they could have fled long ago. Churches are reporting people turning to Christ and being baptised. Amid the horrors that are pouring out on the Middle East, the light and life of Christ is still breaking through.

That does not diminish the horrors being meted out on the Eastern half of the city, nor the violence against Christians in the surrounding territories controlled by Islamist groups, including ISIS. However, it does offer a fragile seed of hope for the future. Aleppo was once a city where people of all faiths lived peaceably side-by-side, a place of culture, where to say you were from Aleppo was to mark you out as a gentleman or woman of refinement and learning. It was a city where the church was strong, with so many Christians living and thriving peaceably alongside their Muslim neighbours. One day, please God, may it be so again.

What can we do?

First of all we can pray – and organisations such as Open Doors, the Barnabas Fund and the Foundation for Relief and Reconciliation in the Middle East (FRRME) all produce good prayer resources for the region, and in particular for the persecuted church.  Remember those Christians still ministering in Aleppo, especially the Christian doctors and nurses who still help run clinics and hospitals in the parts of the city where some infrastructure still survives.

Secondly, speak up for the needs of all the people in the region, and in particular for the church, which continues to face particular persecution. All the organisations listed above have resources that will enable you to write to your MP and MEP to call for national and international action to care for the refugees from the war, for international monitoring and protection of the rights of those left in Aleppo. Get informed, get active. Post stories of what is happening on social media, sign petitions calling for positive action by the government and international institutions.

Thirdly, give to organisations working with refugees in the region. Tearfund, as well as Barnabas, FFRME and Open Doors are among many FBOs (faith based organisations) and NGOs (non-governmental organisations) doing significant work with those displaced by the war.

Fourthly, consider how you can help support and care for refugees in your local community. Contact your local council to find out what they are doing and what you or your church can do to support them. Lobby your MP, MSP and/or AM (or other legislature representative if you are outside the UK) to raise questions in the House of Commons and other national assemblies about how many refugees the UK is letting in and how we are supporting them.

Finally, as a qualified health professional there are opportunities to serve in the region – with Christian and secular NGOs. Check out Christian Vocations and CMF’s overseas opportunities page, or for a list of other NGOs working in the area see the this USAID page

As the prophet Isaiah spoke over Jerusalem in its hour of darkest need, besieged by the Assyrian army in 701BC (2 Kings 19:30-31)

‘Once more a remnant of the kingdom of Judah

will take root below and bear fruit above.

For out of Jerusalem will come a remnant,

and out of Mount Zion a band of survivors.

The zeal of the Lord Almighty will accomplish this.’

Amen  – Lord, may it be so for Aleppo and for its church.