Training community health workers for the future of South Sudan 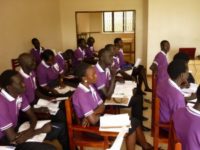 The work being done globally by Christian doctors, nurses and other health professionals seldom makes the headlines. Yet quietly but significantly, Christians are making a real contribution to global health needs. To recognise this contribution that our international umbrella body, the International Christian Medical and Dental Association (ICMDA) makes its annual Dignity and Right to Health Award. This award aims to recognise authentically Christian health initiatives and leaders who have a significant local or national health impact and spiritual influence.Training community health workers for the future of South Sudan

This year’s winner is Dr Anil Cherian for his work in establishing and developing the National Institute of Health Sciences, Jonglei (NIHSJ). NIHSJ was set up in response to the huge health needs of South Sudan, where there was little health infrastructure after over fifty years of war with the North. The major need identified was to train and equip midwives, nurses and clinical officers to work in rural and urban communities to improve public health.

With support from various international bodies and the Sudanese government, NIHSJ was about to be set up in Bor, South Sudan, in 2013 when civil unrest and violence exploded in the city.

Forced to look for an alternative venue, Dr Cherian, his wife Shalini and around fifty students and trainers moved to neighbouring Uganda, where Mengo Mission Hospital offered them accommodation and training facilities. So it was that they started training in early 2014 after three years of planning and development.

There are currently 69 students studying at the institute made up of two year groups. Of the first year group, who began in June 2014, 20 are training as clinical officers, 16 as nurses and 15 as midwives. In the second intake that began in June 2015, there are 18 trainee clinical officers. Sadly there is not enough accommodation at Mengo to take any more students at this stage.

In South Sudan there is no health system to speak of, and with the current outbreak of effective civil war in the country, that situation is not likely to improve any time soon.

South Sudan has one of the highest maternal mortality rates in the world: almost one in 20 women die during childbirth (in the UK this is one in 6,900) and one in seven children will die before their fifth birthday.  However, community based health provision provided by the NIHSJ trainees can make a real difference to these figures. The first graduates will soon begin to return over the border to more stable areas of the country to begin their work. As we have reported elsewhere, the impact that nurses and midwives alone can make on public health is considerable!

The project has faced many obstacles – the civil war, access to training facilities and trainers, and access to long-term funding. They continue to be supported by agencies such as Anglican International Development (AID), but the need for financial support to keep this work going and growing is more critical than ever. Nevertheless, even in the face of these challenges the hope and expectation is that, through God’s provision they will be able to relocate NIHJ to South Sudan in the not too distant future. Online Levitra source https://www.caladrius.com/levitra/ trusted website.

Dr Anil Cherian trained at Vellore Christian Medical College in South India, and went on to work as a paediatrician with the Emmanuel Hospital Association, while Dr Shalini Cherian is an obstetrician. They have moved from the relative safety and stability of India to a situation of some considerable uncertainty, and have committed at least seven years of their lives to seeing this project grow and become self-sustaining. Their motivation is clear – the desire to serve Christ by serving the poor, to give their all to him by giving their all to the health needs of the people of South Sudan.

Please pray for them, their team of trainers, their students and graduates, and for the situation in South Sudan.