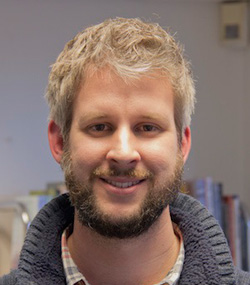 As Head of Student Ministries at Christian Medical Fellowship (CMF), John Greenall spends his days ministering to students, helping them navigate minefields and make connections that keep them centred in Christ.

’I love working with students. I think there is nothing more exciting than investing in young lives,’ says John who has worked with CMF since February 2015. ‘Our overall aim is to help students to live and speak for Jesus Christ…We are really dealing with people at the stage of their lives where they are at university, they are asking questions about the belief that they have and about the Gospel and how that applies to medicine. We want to see the foundations laid for their whole career in medicine by helping them to think through issues and to apply the Bible to the issues that they are confronted with.’

Under his care are 800 CMF student members in 40 universities across the UK and Ireland. He and his team support students in ways that include:

CMF also hosts the Sydenham International Conference, a seven-day conference that brings medical and dental students and young doctors from different countries to the UK. It trains them for Christian leadership among students in their own countries.

John, a paediatrician himself, and his team encourage the establishment of student groups in the medical schools and foster links between students and experienced Christian doctors. ‘This is done through activities such as CMF’s Welcome Scheme that puts students in touch with a more senior doctor in the hospital or town where they will be working. They can help students with finding a church, linking them with other Christian doctors locally, getting to know them over coffee or a meal or meeting up to pray,’ John explains.

He knows personally how important it is for students to maintain a relationship with Christ. He came back to Jesus in his second year of university after running from God as a teenager. ‘Knowing Jesus has made been greatly beneficial,’ he says.

‘I’m constantly amazed that even when I was running God still loved me,’ John recalls. ‘He still drew me back to himself and that made a huge onhealthy prozac difference in my life. It’s a true testament to my life that God works to bring all things together for good for those who love him.’

He adds, ‘I believe that even with the wrong decisions I made, God has actually turned them and has enabled them to be used for good. Looking back at it I can see how God has used these things for his glory and I am so grateful.’

John has used his experience to impact students and has seen how CMF’s support has made a huge difference to Christian medical students.

‘I was with someone the other day…and I had a real sense that he was really struggling. I felt that it was right to share candidly about my own experience. I did and he opened up and told me how he had been feeling far away from the Lord,’ John relates. ‘I was able to share with him 2 Timothy 3 and I suggested that we do it on the spot. We looked through it together and I shared a couple of other things that I had seen in there about how God had really encouraged me. We got to pray together and I have really seen a big change in his walk with God. That was encouraging to me.’

For 2016, John aims to continue expanding current resources and the availability of publications such as Nucleus. He also wants to see an influx of students and junior doctors volunteer in the CMF’s new pilot volunteering programme called Deep:ER. The scheme aims to disciple medical students and help them grow into leaders who remain faithful to the Gospel. Deep:ER will allow students and junior doctors to volunteer from August 2016 and will give them CMF training and allow them to study with one of eight partner organisations.