Debate: To strike or not to strike? (Part 1) 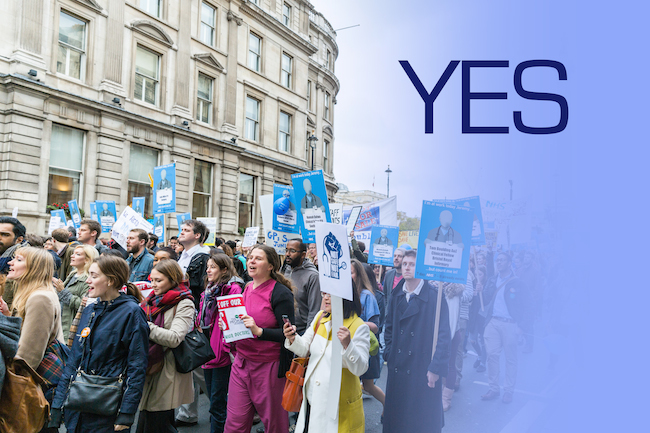 Junior doctor members of the BMA are voting on industrial action over the new contract proposed by the government. Needless to say there is a range of opinion among CMF members on the subject. So we asked two of our members to help us by sharing opposing views.

These articles were commissioned for the forthcoming issue of Triple Helix. However, we thought it would make sense to publish this here to help members prayerfully consider their position.

Join the conversation in the comments below, remembering the principle:  ‘In essentials, unity; in non-essentials, liberty; in all things, charity’.

Yes: ‘We need to stand up for the vulnerable’

Declaration of interest: I am an active member of the BMA Junior Doctors Committee, as well as a CMF member, though I am speaking entirely out of my personal view.

It is 5am on night shift number four. You’ve slept badly between shifts, and haven’t had time for a break yet. Being called to a cardiac arrest may stimulate the needed adrenaline. As for other tasks such as prescriptions, calculations, and handover, you feel the heaviness – the struggle – as you try to approach problems systematically and to make the most appropriate decisions. Junior doctors are already stretched. There is no give left.

As doctors, we already have very demanding jobs with a lot of responsibility.  As Christians, we know salvation is through grace and not by works.[1]  However, we all know many non-Christian doctors and other healthcare staff who each work admirably hard – well beyond rostered hours, and expecting no compensation.

For many of us, it’s an absolute pleasure to actually get paid for a job which (usually!) directly helps people, in a system which upholds biblical principles of treating all as equals.[2] This equality reaches beyond the patient’s past (ie IVDU, alcohol), social status, and personal beliefs. As a Christian, it is a privilege to work in publicly-funded, publicly-provided healthcare (though we can be good servants in any workplace!). Does that mean it’s not okay to strike? Hold that thought…

Safeguards to prevent junior doctors working dangerously long hours: gone. Compensation for unsociable hours: gone. More importantly, as a result, any incentive to stop employers making us work later evenings and more Saturdays: gone (which fits in nicely with the move to increase elective procedures over weekends – medics all know the NHS is already 24/7 for emergency care). This is the contract the government has threatened to impose.

With so much gone, what will be added? More exhaustion from way too many extra hours beyond the rota, as the financial penalty for trusts has been removed. More mistakes. Added to that, more weeknight meetings/fellowship missed, less time spent being parents, being friends, being there for those who need us, and less able to meet with those who support us. From an NHS user’s perspective, do you want your mum being met in A&E by a dissatisfied, overworked and undervalued junior doctor? Junior doctors already have a high risk of burnout.[3]

Those who would suffer the most from this new contract would be those working in the acute specialties and A&E; places where we cannot afford to stretch doctors any further, and where we already struggle with recruitment and retention. Nearly onhealthy celebrex 3,000 doctors said they would move abroad, locum, or leave medicine if the proposed contract was imposed.[4] There is a serious threat that junior doctors will vote with their feet, which would be disastrous for the NHS and for our patients.

Industrial action (IA) is lawful, and employers must be given a minimum of seven days’ notice, which allows for appropriate plans to be put in place so that patients are safe.[5]  If the action goes ahead, the BMA will provide guidance and support.[6] Interestingly, a review of the literature shows that patient mortality may fall during doctors’ strikes, perhaps as elective work is cancelled and doctors reassigned.[7] I would not encourage IA if I didn’t believe it could be done safely, and I still hope the government offer meaningful negotiations first.

I never thought I would hear myself encouraging IA as a doctor. We really have reached the last resort, and I strongly believe it has become a necessary step to defend our patients by defending our doctors’ working terms and conditions. Who will be next? I genuinely believe this proposed contract, as part of the bigger picture, threatens the future of the NHS. We are called to use our voices to stand up and defend those who are vulnerable[8] – those who our NHS already cares for. Having been involved with the BMA, I know that the battle has already been long. Every avenue has been pursued. Along with many other colleagues, I’ve kept up to date with the issues, written to my MP, written for the newspaper, spoken on the radio and TV, and taken part in protest marching. So, I ask you, can we afford not to?

I encourage others to speak out on other matters too,[9] and please, let’s not undervalue the importance of this matter. Whilst we know we have security in Christ, we can also witness by promoting a healthy NHS,[10] with a healthy workforce – even if that means taking part in IA. The two are not mutually exclusive. I ask you, please think long and hard about what we are fighting for (/against!). Yes, examine your heart and pray. If you choose not to take part, then that is your choice. But whatever your views, please consider the issue fully and be informed.

I believe I can act in good conscience as a Christian and vote ‘yes/yes’[11], so that we can send a clear message of the need to negotiate – without threat of imposition –  for a contract that is safe for patients, fair and safe for doctors, and sustainable for the NHS.

Melody Redman is an F2 doctor living in York.