Changing the world one nurse at a time 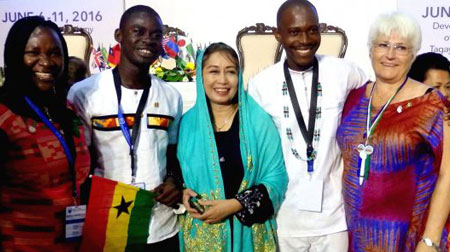 How do you change the world? One person at a time, goes the old adage.  According to a new report from the All Party Parliamentary Group on Global Health (APPGH), the answer is one nurse a time.

Actually, it is much more than one nurse at a time. There are over 19 million nurses registered around the world at the moment, but this falls far short of the numbers needed. Indeed, the demand for nurses, midwives, doctors and other health workers is growing at a pace that is outstripping the supply, even as many countries increase the numbers they are training.

However, this report is not simply bemoaning the lack of trained nurses (although it is a real problem). Nor is it merely offering platitudes about the value of the profession. Rather the APPGH has done a major job of gathering evidence from a range of sources that shows how vital a well-trained, equipped and empowered global nursing workforce is to achieving not only the third sustainable development goal (health and wellbeing for all at all ages), but SDGs five (gender equality) and eight (economic development) as well.  The authors call this the ‘Triple Impact’ of nursing.

Nurses are key to public health. They are usually already embedded within the community in which they work, understand the culture and issues of their patients, and in many areas may be the only health professional available. Health promotion and education, and personal, social and spiritual care are all within the remit of the nurse.

Most nurses are women, so giving them a professional skill and a career increases their prospects and empowerment within the community. One of the leaders of Nurses’ Christian Fellowship International (NCFI) spent the last five years setting up a nursing and midwifery college in Bangladesh that trains young women exclusively from poor rural communities as nurses and midwives. In an arrangement with the government, these nurses and midwives then return to their local communities, employed by the government to bring primary and maternity care back to their own neighbours, while paying off the loan that paid for their training. This not only improves the health of the local community, it lifts the status of these young women who are now respected members of their own communities and acting as role models to a new generation.

As the health of the community and the status of women improve, so does the economic wellbeing of the community. Less money is spent on medicines for preventable conditions, less time is taken off work sick or caring for sick relatives, so economic activity and productivity rises. Women develop economic independence, improving the health and education of their children, so improving the opportunities for the next generation. Especially when it comes to the empowerment and education of women, one area of development impacts on all the others!

What so often holds nursing back from being this force for change and development is that the evidence of this impact is little understood outside of the profession. Furthermore, the research has often been small scale and qualitative when policy makers want quantitative, big scale evidence.

Nursing is a predominantly female profession throughout the world. Where women have low status, and women’s work is seen of secondary value, nurses are disregarded and devalued.

In most countries, nursing has no clear post-qualification training structure and career path and little scope for professional development. Most nurses are not allowed to practise to the full scope of their training in the majority of jurisdictions. As a result, nurses are not listened to, but seen merely as the handmaidens of doctors, not as knowledgeable and skilled professionals in their own right.

Not enough nurses are being trained or retained, draining skilled nurses from rural areas and poor communities to cities and developed countries. Some countries like the Philippines, over produce nurses deliberately to exploit this shortfall, while the UK and many European and North American nations cannot train enough nurses and become net importers.

And these are not developing world problems – the West has them too. For instance, while Federal Law in the US gives nurses a wide legal remit for clinical practice, in only ten of the fifty states is this actually enforced, and in the remaining forty, nurses are not allowed to practise to their full professional competence.

Even in this country, the DoH has recently published plans to scrap its nursing policy unit for England, further marginalising the voice of the profession in Britain (imagine the furore if the role of the medical advisor had been scrapped!). The voices of nurses are being marginalised everywhere.

I was in the Philippines this June visiting local nurse and midwife run health centres that provided models of integrated social medicine, preventative healthcare and health education deeply embedded within the local community that put much primary care work I have seen in the UK in the shade.

Health economists worked out years ago that up to 48% of the work of British GPs could be done as effectively by nurses, but no government has engaged with this. We still have something to learn from the developing world, it seems!

We need nurse leaders who can converse with those in power locally, nationally and internationally to advocate for the health needs of their communities and role of nurses within that. And we need it in the UK, Europe and the US as much as they do in Bangladesh, the Philippines or Zambia.

There is a need for not only leadership, but for the evidence that exists to be disseminated outside the profession, and for more, large scale, quantitative and qualitative research on the health and development impacts of nursing.

We need nurses from the UK and other developed countries to have the chance to work alongside nurses in developing countries, not just to impart skills and a values-based whole person care approach to nursing, but also to learn from nurses in developing countries about the real scope, skills and values that lie at the heart of the profession. In short, we should be fostering a two-way street of learning between nurses across the world to empower and envision the profession in every nation.

We need a proper professional education and career structure for nursing globally, and to lobby governments to allow nurses to practise to the full extent of their training and professional scope. Recruitment and retention are the big issues, in the UK, the US and most developing nations – but if we offer scope for development, recognition and influence, then we will go a long way to solving those problems. As many pointed out at the launch of the APPGH report at Parliament, it is not pay that attracts or keeps people in nursing – it is being valued, listened to and able to use and develop skills to make a real difference for patients.

The report makes many other great recommendations, but it is only one report with no political mandate for the UK or the wider world.

At the launch of the report in the Palace of Westminster on 17 October it was great to hear the new Parliamentary Under-Secretary of State for Development, James Wharton, and new MP and nurse Maria Caulfield both say that the UK government takes this seriously. Even more exciting to hear the Commonwealth Deputy Secretary General, Deodat Maharaj says that the Commonwealth not only endorses this report, but is committing to use its structures and influence to put its key recommendations into practice.  Sadly, my concern is that when it comes to actually putting money on the table, nursing will still be last in the queue, to the detriment not only of the profession, but to the health of this and other nations. This report is only one resource in keeping policy makers’ feet to the fire!

Nursing is so deeply embedded in the Christian faith that it is hard to separate its core values (unconditional care, advocacy for the sick, compassion, education, a whole person understanding of health and care in the context of community and teamwork) from the life and mission of the church. In fact, for centuries, nursing was one of the church’s key ministries, having a sizeable impact on the health and wellbeing of the Roman world. So the conclusions of the APPGH report come as no surprise.

I have seen many times the role Christian nurses and midwives have played in hospitals, rural clinics, disaster zones and training institutions to bring hope, healing, grace and kindness into situations that needed the touch of God. But whatever the background of the nurse, God works through this kind of caring. If, as I have argued elsewhere, the SDGs are worth supporting because they mostly point in the direction that God is moving, then we need to be supporting nursing as a global response to global health needs.