Downright Discrimination – the issues in the Heidi Crowter case 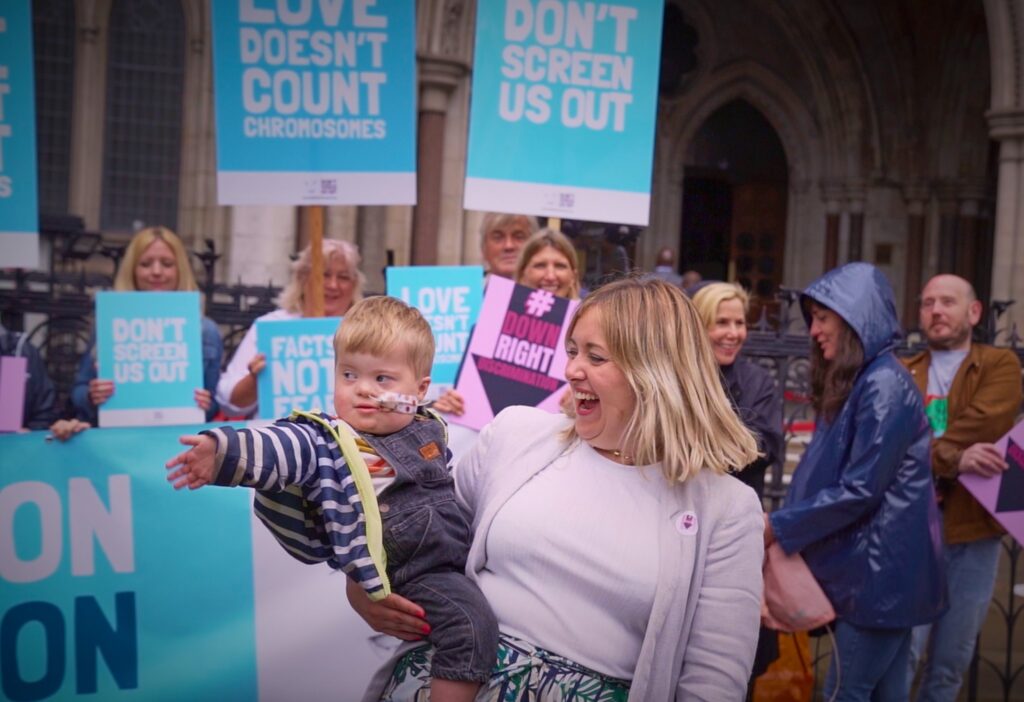 On July 6th and 7th 2021, Heidi Crowter made history. She is the first woman with Down syndrome to take the State to court over the discrimination inherent in our abortion law. Her co-claimants Máire Lea-Wilson and her son Aidan (pictured) also feel passionately about this discrimination. (At least, Máire does, Aidan was just happy with all the attention!)

‘I find it really strange to think there is a law in this country which wouldn’t afford my two children the same rights’, Máire said when she first joined Heidi as a complainant on the case.

And this is what the case is about: rights and discrimination. Some say that the case doesn’t go far enough to challenge our Abortion Act. That’s because it’s not about that, it’s about discrimination. Heidi is challenging the incompatibility of one of our laws, in this case the Abortion Act, with the European Convention on Human Rights (ECHR). In fact the United Nations Committee on the Rights of People with Disabilities (UNCRPD) has already said, in 2017, that it needs to be changed:

Parliament haven’t got round to doing anything about that yet, more than four years on, which is why Heidi and Máire, supported by many disability charities including People First and Inclusion London, as well as Don’t Screen Us Out, are asking the Court to rule. In her speech outside the court, Heidi said that the continued existence of this law tells her people think: ‘That I’m better off dead, although I know I am not, but that is how it makes me feel.’

After 24 weeks, the only reasons for termination should be if there are strong grounds to believe ‘that the termination is necessary to prevent grave permanent injury to the physical or mental health of the pregnant woman’ (Clause 1(1) b, Abortion Act 1967)

However, it is still important to ensure that women have access to the full facts about the mental health implications of late-term abortions to enable them to make an informed choice. We need more evidence to determine under which circumstances the burden on a mother’s mental health is greater from having the baby than from having a late-term abortion. Certainly in the case of fatal fetal anomaly, research suggests that the long term mental health of a woman is better if they have continued the pregnancy. In his Matters of Life and Death, John Wyatt tells the moving story of Christopher, who was diagnosed with Edwards Syndrome at his 20 week scan. His parents chose to continue the pregnancy, and relate that despite the pain and grief associated with his brief life and early death, bringing him to birth gave them, ‘the chance to be a parent, one that we would have been denied completely if we’d have had an abortion’ (Wyatt, J. 2009. Matters of Life and Death, p. 187).

However, I said that this isn’t an argument about abortion, and it isn’t. The UNCRPD stated clearly that although ‘Women’s rights to reproductive and sexual autonomy should be respected’ this must be done ‘without legalizing selective abortion on the ground of fetal deficiency’.

I just hope the Court recognizes this voice and the humanity of those with disabilities, in order to be able to rule on this.

Colette Lloyd is a speech and language therapist, and mum to Katie, aged 23.

Image credit: Don’t Screen Us Out