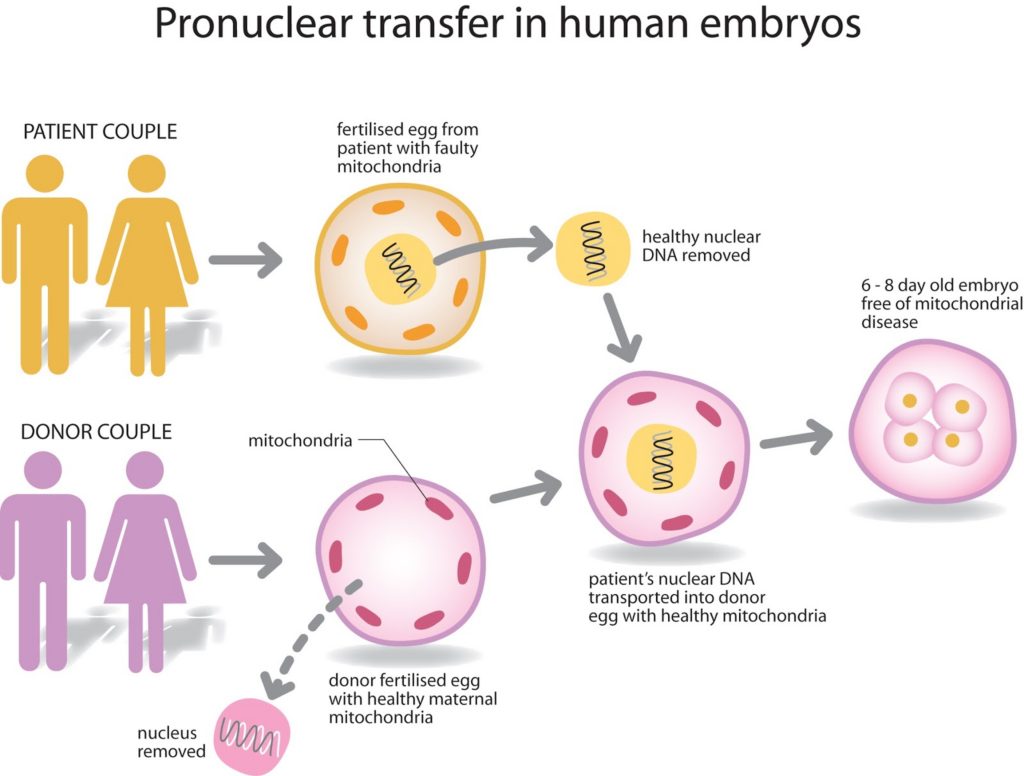 A new IVF-based technique ‘is likely to lead to normal pregnancies and reduce the risk that babies born will have mitochondrial disease’, according to researchers at the Wellcome Trust Centre for Mitochondrial Disease at Newcastle University.

Published on Wednesday 8 June 2016 in the journal Nature, scientists report the first in-depth analysis of human embryos created using a new ‘three-parent’ technique devised to reduce the risk of mothers passing on mitochondrial disease to their children.

Mitochondrial diseases are inherited maternally and cause a variety of severe conditions that currently have no cure. The UK government has recently legalised the controversial use of embryos carrying DNA from three genetic parents to prevent their transmission, but the proposed techniques have been criticised on both ethical and safety grounds (see my previous review).

One of these techniques, called ‘early pronuclear transfer’ (see picture), involves transplanting the nucleus from a fertilised egg into a donated egg, which contains healthy mitochondria, shortly after fertilisation.

Today researchers, in a study involving over 500 eggs from 64 donor women, published results which they say show that the new procedure does not adversely affect human development and will greatly reduce the level of faulty mitochondria in the embryo. They further claim their results suggest that the technique will lead to normal pregnancies whilst also reducing the risk of babies having mitochondrial disease.

The results of the new study will be considered by the Human Fertilisation and Embryology Authority‘s (HFEA) Expert Scientific Panel. The HFEA will ultimately decide whether to issue the first licence to a clinic. A licensed clinic would allow couples affected by mitochondrial disease to have the choice of whether to use pronuclear transfer to try and have healthy children.

What should we make of it all?

This new research might have calmed the nerves of already committed enthusiasts for this controversial technique but it leaves many questions still unanswered.

The Newcastle researchers admit in their press release that one of five stem cell lines derived from embryos they created showed an increase, rather than a decrease, in the percentage of mitochondrial DNA carryover (this important fact is left out in Fergus Walsh’s misleading BBC report).

Rather than bringing reassurance this actually confirms concerns highlighted just one month ago by another researcher in the same journal Nature that three-person embryos ‘may fail to vanquish mutant mitochondria’.

Scientists in New York showed that ‘even if a small number of mutant mitochondria are retained after the transfer’ – an admittedly common occurrence — they can ‘outcompete healthy mitochondria in a child’s cells and potentially cause the disease the therapy was designed to avoid’.

Early embryos that ‘look’ normal (they were only grown to six days) do not necessarily translate into older embryos, fetuses, babies and children that are normal. The deep concerns that this technique will not work, or will work partially producing a whole host of new problems, have not yet been addressed.

It is noteworthy that this other US research has not been given attention by the Newcastle team and the BBC. Not as convenient perhaps?

Serious ethical and safety concerns remain, including the risky and invasive harvesting of large numbers of human eggs from donor women and the identity confusion of genealogically confused progeny, if we ever get that far.

Adoption of children, babies or embryos still remains a viable and safe alternative for these families and DNA editing, which has already been successfully used to prevent transmission of mitochondrial disease in mice, is a far more precise, specific, clever, natural and ethical solution to this problem than stripping nuclei out of embryos and transplanting them into donor eggs.

The end does not justify the means and the greatest scientific advances are always ethical. The human embryo must always be treated with the utmost respect.

It is noteworthy that Shimya Yamanaka, the 2012 Nobel prize winner,  through patient and meticulous research, discovered an ethical alternative to embryo research that revolutionised scientific thinking and won him a Nobel prize.

By contrast, this new research is unnecessary, unethical and still unproven to work in non-human primates, let alone human beings. We should put a halt to it and instead pursue scientific solutions that are more safe, natural, ethical and scientifically precise – more Michelangelo than Picasso.

This is a boundary that should not have been crossed. There are other options (see my blogpost on ‘thirteen solutions to mitochondrial disease assessed’) which offer better solutions.