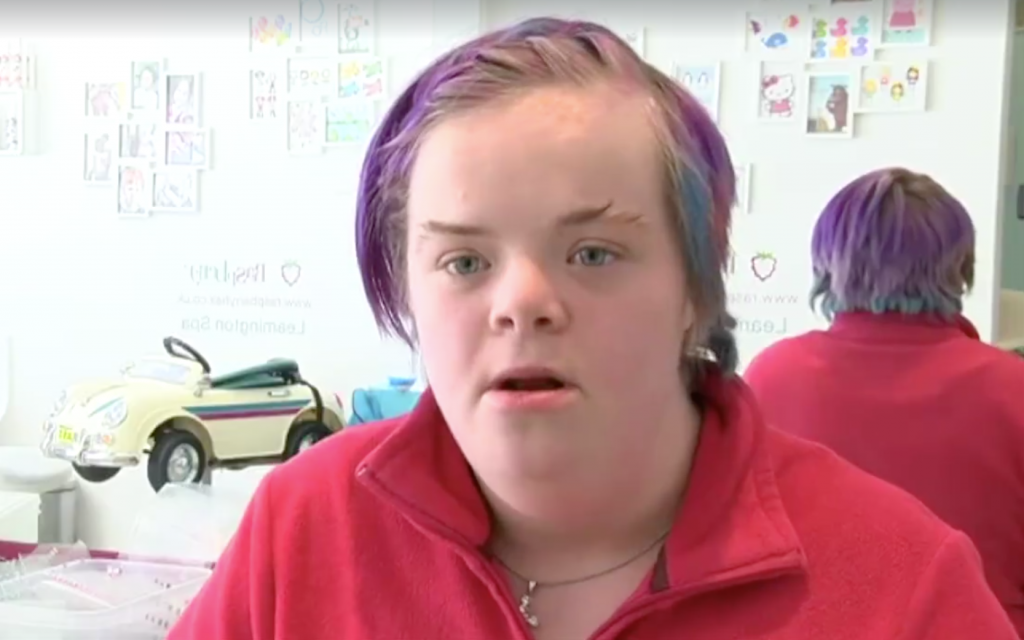 It is not only junior doctors who are trying to get their voices heard by Jeremy Hunt.

One young lady last week made an impassioned plea directly to the health minister, on an issue that is arguably more about life and death than is the case with employment contracts. Her speech has been watched thousands of times already, and can be watched here, but I’ve also written it out in full below, as it deserves an even wider hearing:

‘My name is Heidi, I’m 20 years old, l work in a hair salon, I have Down’s syndrome, and my life is just as important and just as joyful as anyone else’s.

When parents are told their baby has a disability, they don’t always get the support and information they need, and are not told that their little one can thrive and blossom.

They are not told the potential this new human life has, and how much love and happiness they can have and bring to the lives of their family and society.

The Government are considering introducing another test that could lead to fewer children with Down’s syndrome being born every year.

This is because our society, and the health services, don’t realise that children with disabilities are part of the diversity and richness of life.

Parents need to be shown the support and given help to have and look after their babies instead of being faced with a hopeless choice.

Mums and Dads should be given the help they need so that they don’t see a disabled baby as a worry but the beginning of their happy adventure.

Jeremy Hunt, don’t screen us out, work with us so that we can make a society that treats everyone with the dignity, and respect, and compassion, and love that we all deserve.’

Heidi’s fear is that new prenatal tests, that the Government is planning to roll out and provide on the NHS, are directed at screening out more babies with Down syndrome, meaning that even more will be aborted, having a long term impact on the Down syndrome population.

She is not alone in her concern.

Comedian Sally Phillips also spoke out last week about the need for attitudes towards Down syndrome to change:

‘We’re worried. Down syndrome isn’t a disease, it’s a type of person. People who have Down syndrome may be different but they are worth no less than anyone else. We are all human beings. We all count.’

Both Heidi and Sally Philips highlight the utter irony that people who have Down syndrome or other chromosomal differences – ie. those most directly affected by the tests – weren’t consulted at any stage about the new screening tests and no one on the National Screening Committee who recommended their introduction represented the Down syndrome community.

Added to that, and also last week, the organisation that likes to position itself as being the nearest that we have to a National Bioethics Committee (The Nuffield Council on Bioethics) began a new project looking at the ethical issues raised by these new prenatal tests.

One might have dared hope that a group reviewing the ethical issues would include a representative for those most directly affected by these tests. But no, not a single person is on the Nuffield Council working group to represent any Down syndrome organisation. Instead, two of the five members have worked on, and promoted the tests themselves, and advised Government on the programme to introduce them. The remaining members are genetic and/or legal ‘experts’ (on the tests, not the patients). The Chair is Tom Shakespeare who has achondroplasia and who has consistently stated that he supports prenatal screening (see here too).

So no prizes for guessing what that group will conclude, regardless of the evidence it collects.

What Jeremy Hunt, Nuffield and all the other so-called ‘experts’ in this field ought to do is listen to the real experts on Down syndrome.

They should start with listening to Heidi.