A man with a heart for Jesus 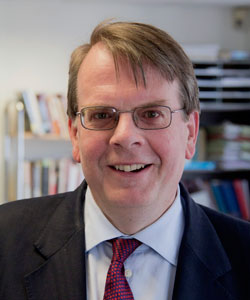 From his tidy office, Graham Sopp and his team quietly make sure Christian Medical Fellowship (CMF) and all its much needed ministries have the impact God intends.

As Head of Operations, Graham oversees many of the central services that keep CMF functioning.

He and his team hold together the accounts, finance, IT, membership and human resources functions. They also handle legal matters and property matters related to CMF’s building.

‘We are there to keep outward facing departments serviced and supported in what they are doing,’ he says.

Graham readily admits that what he likes most about working at CMF is being able to tie his love for God to his duties and to the purpose of CMF, which equips and encourages medical students and professionals to share their faith.

‘I like what the CMF does and I like using my skills and experience to support that,’ says Graham, who has called the CMF home since February 2012.

Before that, Graham spent 20 years in the commercial sector but later decided to serve in the Christian charity sector. He then worked as deputy chief executive at Christian charity Crosslinks and also managed several services at the International Bible Society.

‘I was doing a very similar role to what I am doing at CMF,’ explains Graham.

He values CMF because ‘I think medicine is one of the particular conflict areas between Christianity and secular values and I think it’s particularly important to keep Christian witness in medicine, to keep people unified and supported and (to ensure that) a Christian voice is heard’.

He adds, ‘I enjoy supporting the excellent ministry of CMF so I actually get my feel good factor from the delivery of Christian ministry and from using my skills and ministry to see that happen.’

‘I’m only one of a team and we do work as a team very much,’ says Graham. ‘All of this great support for the CMF is coming from a team of people so when we achieve things, we are achieving them as a team.’

While he has a deep love for his work ministry, Graham’s passion for serving God extends beyond the CMF.

‘Over the years my love for Jesus has driven every aspect of my life,’ says Graham, who grew up in a Christian family but made the decision to choose Christ at age 13 while attending a Christian conference.

‘I came under strong conviction that I had to make my own decision to become a disciple and that is what I did,’ Graham recalls. ‘The preaching was about the need to be a disciple and a follower of Jesus, the need to take it all seriously, the need to get right with God and follow Jesus which I already knew but I needed to do something about it. To be serious.’