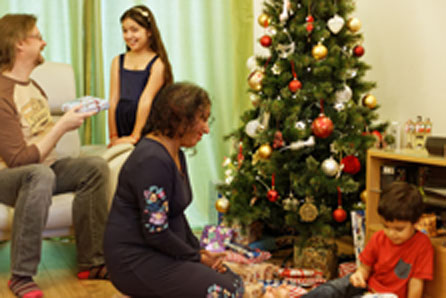 Two CMF members are using the Christmas season to share a special message about God’s love. As Christians get ready to celebrate the birth of Jesus, Justin Thacker and Simon Howell are using their experiences to ask others to share Christ’s love and service in a new way – by signing up to become organ donors.

On 10 December, Justin took Jesus’ lesson about the Good Samaritan to a whole new level by donating his kidney to a stranger.

‘It was my understanding of Christian ethics that led me to make an altruistic donation to a stranger,’ relates Justin, a Lecturer in Theology at Cliff College in Derbyshire. ‘I came firmly to believe that Jesus’ commands to love neighbour and love enemy coupled with Jesus’ definition of neighbour in the parable of the good Samaritan means that there really shouldn’t be any boundaries to our love. If I had said, I’m willing to give this to a friend but not a stranger then I would have felt I was denying that fundamental principle that our love should be towards all.’

So Justin, who trained as paediatrician and worked as a CMF student staff worker, prayed to God about it and underwent the procedure at the Northern General Hospital in Sheffield.

Now resting at home after donating his kidney, Justin is grateful he took the opportunity to give such a life changing gift.

‘The person who has received my kidney has probably been suffering for years and years – and my donation will have significantly eased that,’ he says. ‘I have had word that the recipient took it well and is progressing well and for me that is the point. I’ve two friends with significant kidney disease and the constant burden on their lives of dialysis is horrendous. Being able to remedy that by giving away a kidney is one of the greatest privileges I have ever had,’ Justin says. ‘I feel blessed.’

Simon Howell is hoping more people will follow Justin’s example not only to help him but 7,000 other people in the UK who are currently waiting for organ transplants. Simon has been waiting six years for a kidney transplant.

Desperate to raise awareness of the need for more organ donors, Simon recently opened his home to filmmakers so they could record a day in his life as he waits for a kidney transplant. The film, entitled ‘The Wait’, is part of the NHS Blood and Transplant’ Service’s awareness raising campaign.  It can be viewed here until 16 January 2016. 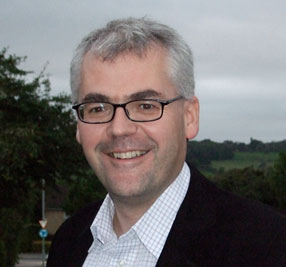 Every day, Simon faces the gruelling task of undergoing peritoneal dialysis. This means having continuous dialysis and changing fluid bags four times per day. These sessions often leave him so tired that he sometimes finds it hard to do activities many of us take for granted, such as playing with his three-year-old son James and his eight-year-old daughter Sarah.

‘For me, it’s the most difficult part of the wait. Dialysis keeps me alive whilst I wait for a transplant but that’s all it does. I’m in limbo,’ says Simon, a doctor who was forced to retire because of his condition. In the film, he says, ‘A transplant would completely transform my health and all our lives.’

Yet despite the hardships, Simon and his wife Anita have not given up hope. Their faith in God keeps them going, Simon tells CMF.

‘I feel he has blessed me,’ says Simon, who has been a Christian for 20 years. ‘My faith is a rock.  When everything else has changed and disappeared, when all that is gone God is still there. It’s reassuring to know he’s always there.’

He adds, ‘God has provided for us. I had to retire. We had to trust God that our bills would get paid and we’d have a roof over our head and we still do.’

Simon looks forward to the day he will receive a transplant – although he readily admits that on the surface, the chances of finding a match could be slim. He believes God will come through for him and others.

‘If God wants to provide a kidney through medical means I know he can. Alternatively, I know he can heal me,’ says Simon.

But Simon also gets a quiet peace from knowing that even if he does not receive a kidney, God will still use him to witness to others.

‘God is faithful so as for the future, I‘ll leave it in his hands,’ he says.

He and Justin encourage other people to consider organ donation.

‘I remain convinced of the view that I held prior to this donation – that it is the duty of every Christian to strongly consider opting in for organ donation at death and, if they are able, to donate blood during life,’ Justin says. ‘Beyond that, there are lots of other factors to consider so I would not say that every Christian should be donating a kidney during their life – though if they do, they will feel immeasurably blessed for doing so.’

Simon adds, ‘I would say sign up (to be an organ donor). There’s no biblical reason not to be. It doesn’t take long (and) you’re saving lives,’ Simon says.  ‘…The organs alone could save or transform up to nine lives, and along with tissue, transform the lives of 50 people… But the decision is yours.’

Other CMF articles on Organ donation