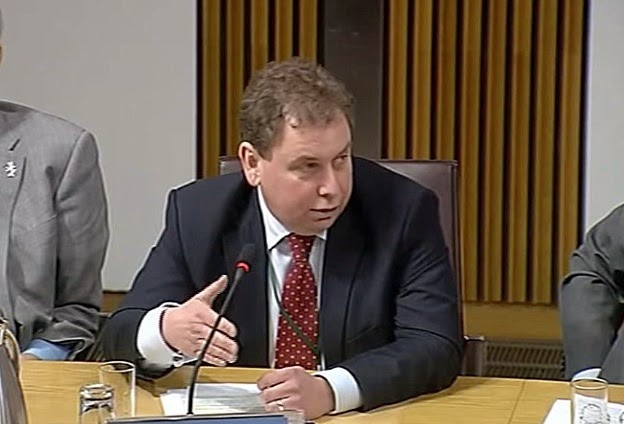 A report by MSPs criticising the proposed assisted suicide Bill before Holyrood has been welcomed by campaigners opposing the legislation.

The Assisted Suicide (Scotland) Bill, introduced by Green Party MSP Patrick Harvie, is due to have its first stage debate in the Scottish Parliament by the end of May.

On a raft of crucial matters the committee has revealed the Bill to be lacking and deeply flawed.

And while stopping short of recommending MSPs to throw out the Bill they have made their view clear that the majority of the Health and Sport Committee, which has been scrutinising the Bill, oppose it.

Dr Gordon Macdonald of Care Not Killing (pictured giving evidence to the committee), said, ‘This report confirms what we have said along. The Bill is poorly thought out, ill-conceived, badly-drafted and effectively not fit for purpose. We are delighted that the committee agrees with us that the Bill contains significant flaws which are likely to prevent it from being enacted. It is gratifying to note a majority of the committee is against the Bill although they have not made a formal recommendation to the Parliament to reject the Bill.’

Catherine Garrod, Edinburgh Disability Rights Campaigner speaking on behalf of Not Dead Yet, another campaign group opposing the Bill, said: ‘Disabled people oppose assisted suicide because it gives the message that our lives are not worth living. Disabled people want assistance to live, investment in health and social care, good palliative care, support for independent living and the right to equality not assisted suicide.’

Care Not Killing is strongly opposed to legalising assisted suicide and firmly believes life should be protected and palliative care prioritised. It represents more than 40 professional groups, faith groups, human rights groups, medical professionals, palliative care specialists and legal experts who are convinced it would be dangerous and unnecessary to decriminalise the existing law on homicide.

Dr Macdonald said. ‘We do not want the state-sanctioned killing of old, ill and disabled people of all impairment.

‘We want support for people to live – not to die. In recent weeks as the Bill has been scrutinised we have witnessed repeated and sustained criticism  from a variety of sources and for a range of reasons because it is so badly drafted – leading experts in medicine and palliative care, senior lawyers and experienced ethicists who all express serious and genuine concerns. And more than 15,000 members of the public have signed our petition.

‘We have always maintained that assisted suicide is unnecessary, unethical and uncontrollable. This is compounded by the fact that this is a weakly thought-out and poorly-written Bill. The numbers of people who have criticised whole parts of it, quite aside from any moral or ethical objections, highlight the problems with the legislation.’

The Bill calls for the creation of  ‘licensed facilitators’ – aged as young as 16 – who would assist individuals end their life and would remain close by until such times and even film the scene as the individual dies or decides not to proceed with the assisted suicide.

In effect, the Scottish Government is being asked to fund and train licensed killers to preside over the suicide deaths of teenagers as young as 16.

Dr Macdonald added: ‘We believe the public needs to be fully aware of all the arguments and not just be influenced by the knee-jerk emotional arguments about so-called dignity in death from those who back the Bill.

‘People change their minds quickly on this issue when they are told about the possible impact on the vulnerable, those near the end of life, the sick, elderly, disabled and depressed who may consider onhealthy zyban themselves in some way a burden and through fear of becoming a financial, emotional or care burden find themselves pressured in some way to opt for assisted suicide.

‘The proposed safeguards contained in the Bill are simply not robust enough to prevent abuse from occurring. Many people, including leading doctors, spokespeople for disability groups and representatives of Scotland’s churches, have criticised this Bill . And it must be rejected by MSPs and the Scottish Parliament at the soonest opportunity.

‘Countries which have enacted assisted suicide laws have seen the eligibility criteria expand and widen putting intolerable pressure on the ill, the elderly and the infirm. Recently a bill was introduced in Oregon seeking to widen the eligibility criteria for assisted suicide. This is a perfect example of the incremental and insidious widening which would inevitably follow here were the bill to be passed – Oregon is not an example we want to follow and that is the model upon which the Bill before Holyrood is based.’

Dr Macdonald added, ‘I am delighted the First Minister and other party leaders including Jim Murphy (Labour) and Willie Rennie (Liberal Democrats) have expressed their opposition to the legalisation of assisted suicide. They clearly understand it would bring pressure on vulnerable people to end their lives and put the elderly and disabled at risk of abuse as well as very ill young children.

‘The First Minister summed it up well when she said:  ‘I believe we should support people to live and I am therefore  in favour of good quality palliative care. There also remains a major stumbling block to assisted suicide: How could you have sufficient safeguards?’

‘The new Bill follows very closely the 2010 End of Life Assistance Bill proposals which MSPs comprehensively rejected in Holyrood by 85-16. MSPs are likely to again have a free vote on this Bill. The First Minister and other leaders have one vote each and we hope the vast majority of MSPs will  follow their example after examining all the evidence.’

Dr Macdonald highlighted a number of key conclusions of the committee criticising the Bill including:

*The Committee is not persuaded by the argument that the lack of certainty in the existing law on assisted suicide makes it desirable to legislate to permit assisted suicide;

*Members have also acknowledged that there are ways of responding to suffering (such as increased focus on palliative care and on supporting those with disabilities), which do not raise the kind of concerns about crossing a legal and ethical ‘Rubicon’ that are raised by assisted suicide.

*The Committee considers that a requirement for mandatory psychiatric assessment would be desirable in relation to any request for assisted suicide by a person who was terminally ill, under the age of 25, and/or with a history of mental disorder. The Committee also acknowledges the argument that given the magnitude of the decision to commit suicide, assessment by a psychiatrist ought to be routine in all cases.

*The Committee considers that legislation to permit assisted suicide seems discordant with a wider policy of suicide prevention by ‘normalising’ suicide and seeming to endorse it.

What you can do

Watch/read and share CNK’s oral evidence to the Health and Sport Committee (full video/highlights; text highlights parts one and two)