How you can help grow Christian doctors worldwide

In July 2014 over 1,000 Christian doctors and medical students from over 60 countries will meet in Rotterdam, the Netherlands, for the 15th WorldCongress of the International Christian Medical and Dental Association (ICMDA).

Our aim is to help key students and junior doctors from resource-poor parts of Eastern Europe, Asia and Africa to attend.

Previous world congresses have played a major role in establishing Christian medical fellowships all over the world as well as encouraging and equipping thousands of individual Christian doctors and students to live and speak for Jesus Christ.

Dr Alex Bolek (right) is a young South Sudanese doctor who was helped with travel and registration for the last World Congress in Uruguay 2010. Today he is a key player in a major Sudanese mission project to develop an Institute of Health Sciences to train healthcare workers in the Nile river town of Bor about two hours’ drive north of the Capital Juba. The project is a joint venture between ICMDA, the Health Ministry of South Sudan and the Anglican Church. Training is scheduled to start in June 2014. 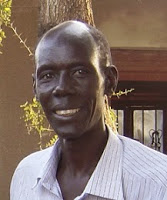 500 Euros (£420) will fund one doctor or medical student for the whole week in Rotterdam with accommodation provided free through host-families. A stringent selection process (that includes feedback from national associations and leaders) is in place to ensure that the right candidates get the bursary.

This is a wonderful opportunity to invest in ICMDA’s dream of ‘a Christian medical witness in every community, in every country’.

Please give generously and help us hit the target so that more like Alex can benefit.