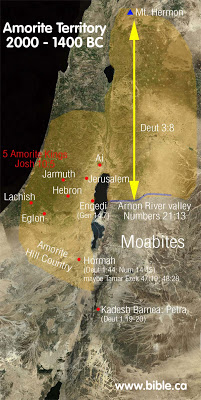 The Amorites were an ancient people, who according to the Bible were directly descended from Noah’s grandson Canaan (Genesis 10:16). At the time of Israel’s exodus from Egypt (c 1446 BC) they occupied much of present day Palestine and Jordan on both sides of the Jordan River (see map).

The Israelites under Moses wiped out the Amorites east of the Jordan (including the two kings Og of Bashan and Sihon of Heshbon) and occupied their land (Numbers 21:21-35).

After crossing the Jordan the Israelites, now under Joshua’s leadership, destroyed the western Amorite civilisation.  The kings of the five city states of Jerusalem, Hebron, Jarmuth, Lachish and Eglon were executed by Joshua and their people erased from the pages of history (Joshua 10:1-27).

On both occasions the Amorites attacked first.

What lessons can we learn from the slaughter of the Amorites? Here are ten:

1. The nations belong to God

The Amorites, like all people on earth, belong to God (Psalm 24:1) and he can do whatever he chooses with his own possessions. If he decides to wipe a nation out, in this case by using the nation of Israel as his instrument, then that is his prerogative. God is sovereign over the nations and gives them to anyone he wishes (Daniel 4:17, 5:21). He does the same today.

Virtually no one lives beyond 120 years, the limit for human longevity which God set after the flood (Genesis 6:3). Every human being eventually dies, usually from disease or trauma. This is a consequence of the curse of the Fall – when humankind rejected God’s rightful rule (Genesis 3). The Amorites suffered the fate that awaits all human beings but died through battle rather than from disease.

3. God is sovereign over the nations

God marks out for all nations their appointed times in history and the boundaries of their lands (Acts 17:26). He decreed that the Amorites would last until around 1400 BC. You’ll notice that most of the other nations in the immediate vicinity at the time no longer exist either. Where are Moab, Edom, Ammon, Philistia and Phoenicia today? For that matter where are the empires of Assyria, Babylon, Persia, Media, Greece and Rome? Today’s nations (and Empires) should take warning.

Have you ever wondered why God kept his own people under slavery in Egypt for over 400 years? It was because the ‘sin of the Amorites had not yet reached its full measure’ (Genesis 15:16). God delayed his judgement on the Amorites for over 400 years out of mercy whilst his own chosen people suffered and he suffered with them. The Amorites had every opportunity to change their ways but chose not to, so judgement eventually came. We should not take God’s patience for granted. It should rather lead us to change our ways (Romans 2:4).

5. God regards sin as serious and will bring judgement

The Amorites indulged in sexual immorality, child sacrifice and idolatry. These are serious sins and such a people could not be allowed to survive. The Amorites were called to account for their sins as eventually will every nation – and every person – on the face of the earth. Nations which indulge in sexual immorality (ie. sex outside marriage), kill their children (eg. through abortion) and practise idolatry (ie. greed – see Colossians 3:5) today should learn from the fate of the Amorites.

6. God delivers on his promises

God told Moses that he would drive the Amorites out of Canaan ahead of Israel. He did, along with the nations of the Hittites, Hivites, Jebusites, Girgashites and Perizzites. He also told Moses he would give Israel the Amorites’ land. He did but he drove the Amorites out not because Israel was good but because the Amorites’ time for judgement had come (Deuteronomy 9:4-6). But these were not God’s only promises. In Genesis 15 God tells Moses that those who eventually share his faith in the one true God will be like the stars in number. Furthermore these people will include not only believing Jews, but people from every nation on earth (Romans 4:16,17; Revelation 7). God will deliver on these promises too.

7. God will protect his people

There are no Amorites on the streets of New York or Palestine today but there are many Jews both in New York and in Israel. God ensures the survival of his chosen people. Sometimes the only way of doing that is by destroying their enemies. When Israel came to the boundaries of the Amorite territory they simply asked for safe passage (Numbers 21:22). But the Amorites sought to destroy them. Israel responded in self-defence. Those who seek to destroy the Jewish nation today need to appreciate that it was God who put them back in Palestine and that he already has ensured their survival against the greatest world empires for the last 4,000 years. Those who seek to destroy Christians today should note the warning of 2 Thessalonians 1:6-10.

God promised the Israelites (who became the Jews) Amorite land both east and west of the Jordan River. But they possessed it only for a limited period of time. As a result of their disobedience to God their own territory was reduced in size by foreign armies and they were later exiled to Babylon. After their return they were scattered all over the world following the fall of Jerusalem to the Romans. This is exactly what God warned them would happen if they disobeyed him (Deuteronomy 28:15-68). God disciplines those who he loves (Hebrews 12:4-11). He still does so today.

9. There is something far more serious than a violent death

Jesus said, ‘Do not be afraid of those who kill the body but cannot kill the soul. Rather, be afraid of the One who can destroy both soul and body in hell.’ (Matthew 10:28) There is fate far worse than death: being excluded from God’s presence forever in Hell. When people asked Jesus about others who had died violent deaths he warned them, ‘unless you repent, you too will perish’ (Luke 13:1-5). We need to remember that after death comes judgement and that all human beings who have ever lived, including the Amorites and ourselves, will face it (Hebrews 9:27).  We need to make sure we do not end up on the wrong side of that judgement.

The Amorites were evil people but all of us have equally sinned and fallen short of God’s glory (Romans 3:23). We all thereby deserve God’s judgement but God offers eternal life through Jesus Christ (Romans 6:23). God’s desire is that all should reach repentance (2 Peter 3:9) but we know that many will not (Matthew 7:13,14). God has provided the way through Jesus Christ for anyone who seeks it to receive God’s forgiveness and to spend all eternity with him (John 3:16-18, 5:24; Romans 10:9,10). If you want to understand more about how Christ’s death and resurrection makes this possible see here. If you wish to read a short explanation of the Christian gospel message see here.