Lord Falconer has finally announced that his long awaited assisted suicide bill will be tabled in the House of Lords next week on Wednesday 15 May.

It is then that we will finally see the full text of the bill which will then proceed to second reading (debate stage) sometime in June, or possibly in the autumn.

According to the BBC and Telegraph the bill will be based on the Oregon model – assisted suicide for mentally competent adults who have less than six months to live.

The timing has been carefully planned. On 13 and 14 May the Court of Appeal will be hearing the case of Paul Lamb, a 57 year old man with quadriplegia, who is seeking permission for a doctor to kill him by means of a lethal injection.

Off the back of media coverage of this case, Falconer, who is being backed by Dignity in Dying (the former Voluntary Euthanasia Society), will argue that his proposal is modest in comparison.

Lamb is not terminally ill and wants a doctor to give him a lethal injection (euthanasia).  Falconer however is only asking for people who are terminally ill to have the right to receive help to kill themselves (assisted suicide).

This model, he will argue, will be safer for vulnerable people and will have ‘upfront safeguards’ to stop abuse.

According to House of Lords calculations in 2005 a Dutch-type law (such as Lamb is seeking) would mean 13,000 euthanasia deaths a year in Britain, but an Oregon-type law (like Falconer’s) would mean only 650.

Falconer is thereby attempting to position himself as the reasonable middle ground between those who wish to keep euthanasia and assisted suicide illegal and those who want extensive decriminalisation. 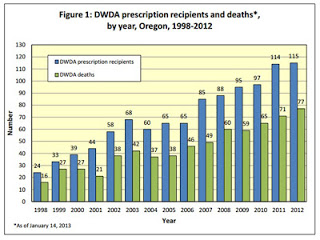 We should not be fooled by this ploy and the situation in Oregon is already ringing loud alarm bells.

Members of the House of Lords should note that statistics released just earlier this year (full report here) show that the number of assisted suicide prescriptions and deaths in Oregon, once again, increased in 2012 and has now reached an all-time high.

This pattern of incremental extension is similar to that seen in the Netherlands, Switzerland andBelgium other countries that have changed the law.

A major factor fuelling this increase is suicide contagion – the so-called Werther effect. This is particularly dangerous when assisted suicides are backed by celebrities as they are here and given high media profile as they are frequently by the BBC.

The Oregon numbers may not seem large but we need to remember that Oregon has a very small population relative to the UK and that they may well be an underestimate as they are based on physicians’ self-reporting.

But for argument’s sake let’s simply take them at face value. How would they then translate to Britain?

Back in 2006, and based on Oregon’s total of 38 assisted suicide deaths in 2005, the House of Lords calculated that with an Oregon-type law we would have about 650 cases of assisted suicide a year in Britain.

But as the numbers in Oregon have since doubled to 77 the UK equivalent would now be 1,300.

We should learn from the Oregon experience and be resisting these moves.

Any change in the law to allow assisted suicide (a form of euthanasia) would inevitably place pressure on vulnerable people to end their lives so as not to be a burden on others and these pressures would be particularly acutely felt at a time of economic recession when many families are struggling to make ends meet and health budgets are being slashed. Especially when fears about the NHS are actually fuelling support for assisted suicide. The so-called right to die can so easily become the duty to die.

And once legalised there will inevitably be incremental extension as we have seen in Oregon, Switzerland, Belgium and the Netherlands. Legalisation leads to normalisation. New hard cases will brought to bring pressure to widen the existing criteria to allow extension to ‘Gillick competent’ minors, people without mental capacity who ‘would have wanted it’ and those who are ‘suffering unbearably’ but are not terminally ill.

I have previously blogged about the shroud of secrecy which surrounds assisted suicide practicein Oregon, the worrying trends in neighbouring Washington state, which enacted a similar law more recently and the way the Oregon law steers people toward suicide.

Also deeply concerning are reports of depressed patients being killed without being treated, doctor shopping, deaths taking place without witnesses present (raising questions about elder abuse) and the fact that 44 of the 77 who died last year (57%) said that they were concerned about being a burden on family, friends and caregivers.

The lessons are clear. Let’s not go there.

The best system is what we have already – a blanket ban on both assisted suicide and euthanasia which provides a strong deterrent to exploitation and abuse whilst giving discretion to both prosecutors and judges to temper justice with mercy in hard cases.

Under this the number of people going to the Dignitas facility in Switzerland to end their lives remains a trickle of about 15-20 per year.

So let’s keep that system in place and concentrate on providing the best possible care to people who are dying. Let’s major instead on killing pain without killing the patient.