Should ‘gay’ Christians be true to their feelings?

Mr Birch (pictured) was ‘straight’ and engaged to be married when he suffered a freak accident in the gym. The 26-year-old tried to impress his friends with a back flip but broke his neck and suffered the stroke. When he woke up, he underwent a drastic personality change that included an attraction to men.

Claiming that he ‘had to be true to (his) feelings’ he broke off his engagement and found a boyfriend.

The article speculates that ‘the personality change could have been caused by the stroke opening up a different part of his brain’ and quotes Stroke association spokesman Joe Korner as saying, ‘During recovery, the brain makes new neural connections, which can trigger things people weren’t aware of such as accent, language or perhaps a different sexuality.’

The case raises several interesting questions for Christians, not least ‘to what extent should we be “true to our feelings”?’

To answer it we have to appreciate that the issue of homosexuality needs to be understood at a number of levels.

In Mr Birch’s case above, it appears a change of sexual orientation occurred as a result of a brain injury. But in the vast majority of cases it arises as a result of a complex interaction between genetics, environment and lifestyle choice. But often there is little or no choice involved.

There is some overlap but also a lot of distinctiveness in these four categories. For example, in certain circumstances (eg prisons, boarding schools), people who have neither a homosexual orientation or identity may participate in homosexual behaviour.

An ONS survey last year suggested that almost three-quarters of a million UK adults in Britain say they are gay, lesbian or bisexual – equivalent to 1.5% of the population.

People aged 16 and over were questioned about their self-perceived sexual identity, and asked to respond with one of four options: heterosexual/straight, gay/lesbian, bisexual or other. 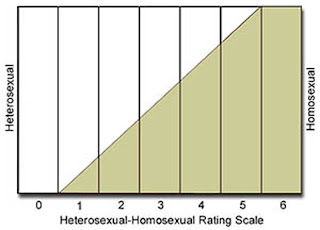 There are, by this reckoning, many people in church congregations who experience some feelings of same-sex attraction or recognize themselves as having a homosexual orientation. In fact, given that nine million people (15% of Britain’s population) go to church at least once a month, then that may mean that there are 72,000 gay and lesbian and 36,000 bisexual churchgoers in Britain (15% of above figures).

So if this describes us should we ‘be true to our feelings’ by having same-sex sexual relations or indulging in same-sex fantasy?

The Bible is very clear that all sexual relations outside marriage (a life-long exclusive monogamous heterosexual public covenant relationship) are morally wrong (Leviticus 18:6-23, 20:10-21; Romans 1:26, 27); 1 Corinthians 6:9,10; Colossians 3:5; 1 Thessalonians 4:3; 1 Timothy 1:9,10; Revelation 22:15). This includes fornication, adultery, same-sex relations and all other sorts of sex imaginable, even if you are deeply in love with the other person.

Claiming that we are just ‘being true to our feelings’ in this area is just as wrong as claiming that our feelings justified any other form of sin. As Jeremiah put it ‘the heart is deceitful above all things and beyond cure’ (17:9) It is God’s Word that must guide us, not our feelings.

So people who become Christians, who recognize that they experience same-sex feelings or have a homosexual orientation and/or identity, are in the same category as anyone who hasopposite-sex feelings but is unmarried, divorced, widowed or in a marriage relationship where, for physical or psychosexual reasons, sex is not possible.

They must accept that not having sex is their only option. And for those who recognize themselves to be exclusively of homosexual orientation this may well mean that the only course open to them is staying single. Sometimes sexual orientation may change over time, but often it doesn’t.

Jesus of course was unmarried and never had sex yet we know that he ‘was tempted in all ways as we are – yet was without sin’. This must surely have included the temptation to sexual sin.

Is it possible to live a full life without having sex? Well Jesus did just that. And he is able to help any Christian to do the same. Marriage is a great calling but so is singleness, and sex is neither compulsory, nor necessary, in order to live a fulfilled and fruitful life.

Sex is a wonderful gift but like any gift it is not granted to all. If for any reason you can’t have sex, then ask what other good gifts God has given you, and enjoy those instead.

‘For this reason he had to be made like his brothers in every way, in order that he might become a merciful and faithful high priest in service to God, and that he might make atonement for the sins of the people. Because he himself suffered when he was tempted, he is able to help those who are being tempted.’ (Hebrews 2:17, 18)

‘For we do not have a high priest who is unable to sympathise with our weaknesses, but we have one who has been tempted in every way, just as we are — yet was without sin. Let us then approach the throne of grace with confidence, so that we may receive mercy and find grace to help us in our time of need’ (Hebrews 4:15, 16)

‘No temptation has seized you except what is common to man. And God is faithful; he will not let you be tempted beyond what you can bear. But when you are tempted, he will also provide a way out so that you can stand up under it’ (1 Corinthians 10:13)

For pastoral support on these issues visit the True Freedom Trust. http://www.truefreedomtrust.co.uk/